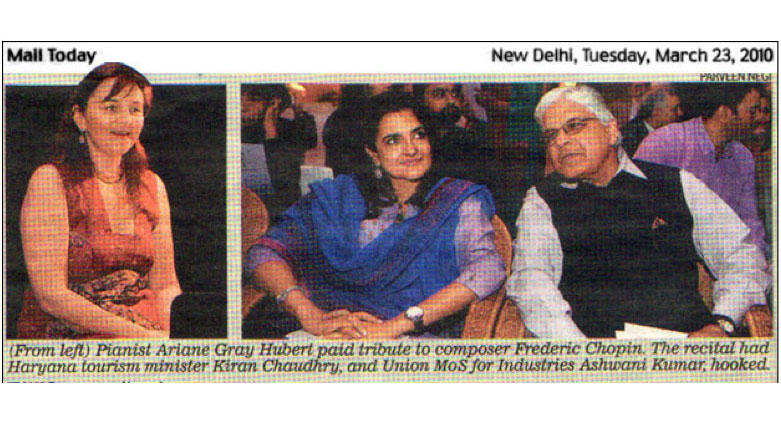 It was cross-cultural connections at their best – Frederic Chopin’s compositions played by a French artiste inspired by Indian musical greats. The occasion was a piano recital by Ariane Gray Hubert in tribute to master composer Chopin at the Embassy of France on Friday evening. Ariane, a singer and composer who started her musical journey with the piano at the age of four, rendered an engrossing hour long performance that reflected the musical genius of the Warsaw-born Chopin through his famous compositions such as the Preludes, which are short collected pieces that fuse tension, poetry and daring. The Mazurkas, on the other hand, had lyrics that captured the breadth-and-cadence of his musical-line. The concert, which opened with the Prelude, written by thecomposer in 1836 was interspersed with narration by the planist about each composition to the invited audience, which comprised of Jerome Bonnafont, ambassador of France to India: Karan Singh, chairman, Indian council for cultural Relations (ICCR); Rajyasabha MP from Rajasthan, Najma Heptullah and other embassy officials. The event concluded with La Note Bleue, a personal composition by Hubert meant as a tribute to Chopin. As a musician, inspired by Hindustani classical vocalist Bhimsen Joshi; Ali AkbarKhan, the late sarod artiste and M.S Subbulakshmi, the late carnatic musician, Hubert was all praise for the concept and essence of time in Indian music. “Indian music has a very organic combination with an essence of natural time embedded in it.” said the artist who has performed up to 15 concerts a year in India, since her first trip to the country 11 years ago on an invitation from ICCR. The concert also heralds the arrival of “Namaste-France” the festival of India in France beginning April 14, as the curtalns come down on “Bonjour India,” the festival of France in India.