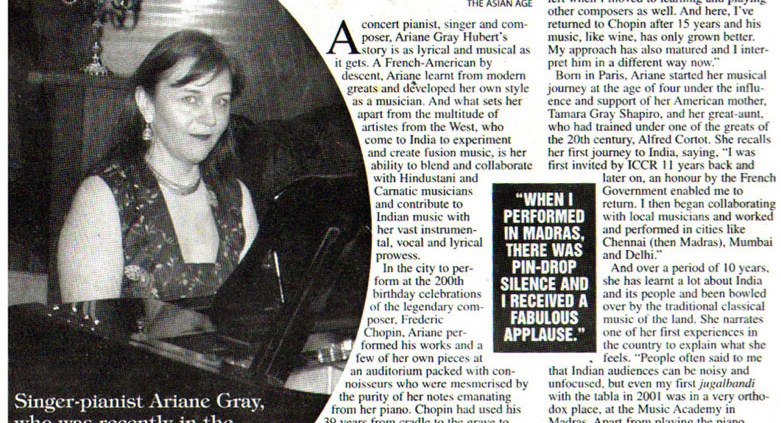 A concert pianist, singer and composer, Ariane Gray Hubert’s story is as lyrical and musical as it gets. A French-American by descent, Ariane learnt from modern greats and developed her own style as a musician. And what sets her apart from the multitude of artistes from the West is her ability to blend and collaborate with Hindustani and Carnatic musicians and contribute to Indian music with her vast instrumental, vocal and lyrical prowess. In the city to perform at the 200th birthday celebrations of the legendary composer, Frederic | Chopin, Ariane performed to an auditorium packed with connoisseurs who were mesmerized by the purity of her notes emanating from her piano.

Ariane talks about her admiration for the legendary musician, saying, “Chopin was remarkable because he was so focused and dedicated, and he single-handedly brought about an entire revolution in Western classical music. He revolutionized the piano. I initially played his music for very long time but left to play other composers. And here I play Chopin after fifteen years, and my approach has also matured. I interpret his music differently now.”

Ariane succeeded in bringing to the capital the magic of music.

Born in Paris, Ariane started her musical journey at the age of four under the influence and support of her American mother, Tamara Gray Shapiro, and her great-aunt who had trained under one of the greats of the 20th century, Alfred Cortot. She recalls her first journey to India, saying, “I was first invited by ICCR eleven years back and in between, an honour by the French Government enabled me to return. I then began collaborating with local musicians and worked and performed in cities like Chennai (then Madras), Mumbai and Delhi.”

And over a period of ten years, she has learnt a lot about India and its people and has been bowled over by the traditional music of the land. She narrates one of her first experiences in the country to explain what she feels. “People often said to me that Indian audiences can be noisy and unfocused, but Indian are fabulous audience. Even at my first jugalbandi with ghatam in a very orthodox place, the Music Academy in Madras, I was playing the piano there and singing a blend of Vedic and Gregorian chants. And throughout the entire performance there was pin-drop silence in the auditorium and I received a fabulous applause after it. So, I felt that if they can feel the music and the intensity of an artiste then the Indian audience respects their work,” she sums up.

The Hindu When fingers reign supreme